The Return of the Champions

Both the 2010 defending Champion, Tan Khai Boon and reigning Women Champion, Fong Mi Yen have both agreed to play in the National Closed 2011. And with the inclusion of former 2008 National Champion Edward Lee, this year's National Close is set to becoming one of the stronger National Closed event that we have seen in recent years.

Effort are also being made to invite our top FIDE rated players to join in the fray and should any of them decide to play, National Closed 2011 is set to showcase some ultimate questions that have been playing on most of our mind...

Will our rising stars be able to finish side by side with the more senior players? Are the champions of today able to give our more experienced (but older champions) a run for their money? Will we see any younger talents rise amongst our best of the best?

Players who have reached a FIDE rating of 2300, has been categorized as players who are above and beyond the rest of the field. There would be no better ground than the National Closed to prove if this is true, or otherwise.
Posted by DAT Chess at 2:56 PM No comments: 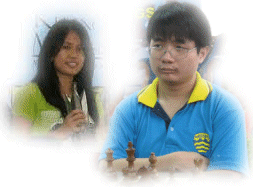 With the confirmation of last year’s Men’s National Champion, NWM Tan Khai Boon the stage is all set with 2 defending champions present for the 2011 National Closed.

Posted by GilaChess at 12:26 PM No comments:

Email ThisBlogThis!Share to TwitterShare to FacebookShare to Pinterest
Labels: Announcements

Although there are limited space left for the National Closed, players who are still keen to play are advised to continue submitting their names as there could be possible cancellation from a few of the pre-registered players. However, as the early bird deadline had ended yesterday, players wishing to play in the National Closed will now have to pay the normal registration rate.

For players representing their states, the 50% registration fee still applies until 1st March 2011 after which, the normal rates shall apply.

For players having FIDE rating of above 2200, it is FREE entry for them provided they register to play before 9th Mach 2011. After that, a fee of RM50 shall apply.
Posted by DAT Chess at 8:31 PM No comments:

Check out the Participant's tab. (above)


No news yet whether 2010 Men's Champion NM Tan Khai Boon's will be defending his title as his name is not in the list.

Important Reminder:
20th February 2011 will be the last day to register for discounts after that, the normal registration rate shall apply.
Posted by GilaChess at 1:35 PM No comments:

This is a Flickr badge showing public photos and videos from nc2011webmaster. Make your own badge here.
Created with flickr badge from softsea.